Centre Point is a London landmark and considered to be one of the great works of modern brutalist architecture.  The iconic skyscraper was designed by architect Richard Seifert’s practice and, when built in 1966, it captured the adventurous spirit of 1960’s London.  Standing at the junction of Oxford Street and Tottenham Court Road, with unparalleled views of the City, the West End and beyond, its status was confirmed when it became protected by English Heritage, thanks to the exceptional and pioneering design of the building. 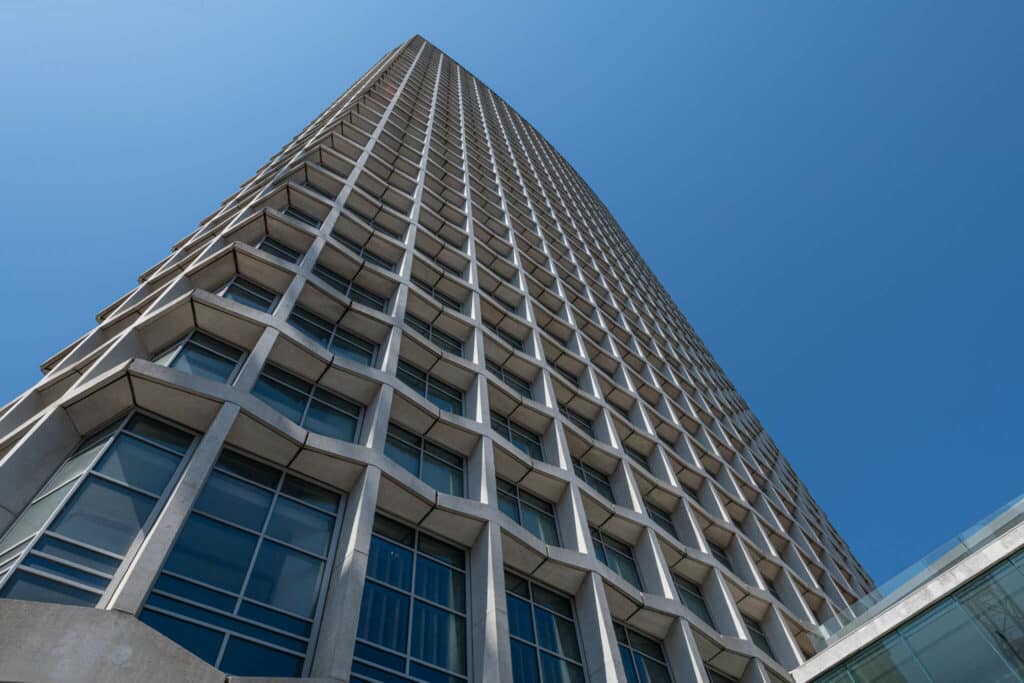 The tower has been the subject of a £162m transformation by developers Almacantar, to create 82 high quality exclusive apartments together with hotel-style amenities such as private meeting, dining and lounge facilities, cinema room, fitness suite, spa and indoor pool.  Waverley have played a part in this high profile project by providing and installing all the window blinds – over 1,500 motorised Silent Gliss roller blinds – working for main contractor Multiplex.

The apartments were destined for the luxury market and therefore the interiors were also required to meet an exceptionally high standard with impeccable attention to detail. With exterior walls being predominantly glass and maximising the panoramic views, the role of the window furnishings was an integral part of creating the optimum interior.

The requirement was for two blinds, one for solar screening and the other for privacy or dimout.  They needed to be motorised with level bottom bars during operation and had to be integrated into the apartment control systems.

It was early in 2012 when Tom Brownson of Silent Gliss started discussion with architects Conran & Partners with regard to the ceiling pocket space needed for the blinds. 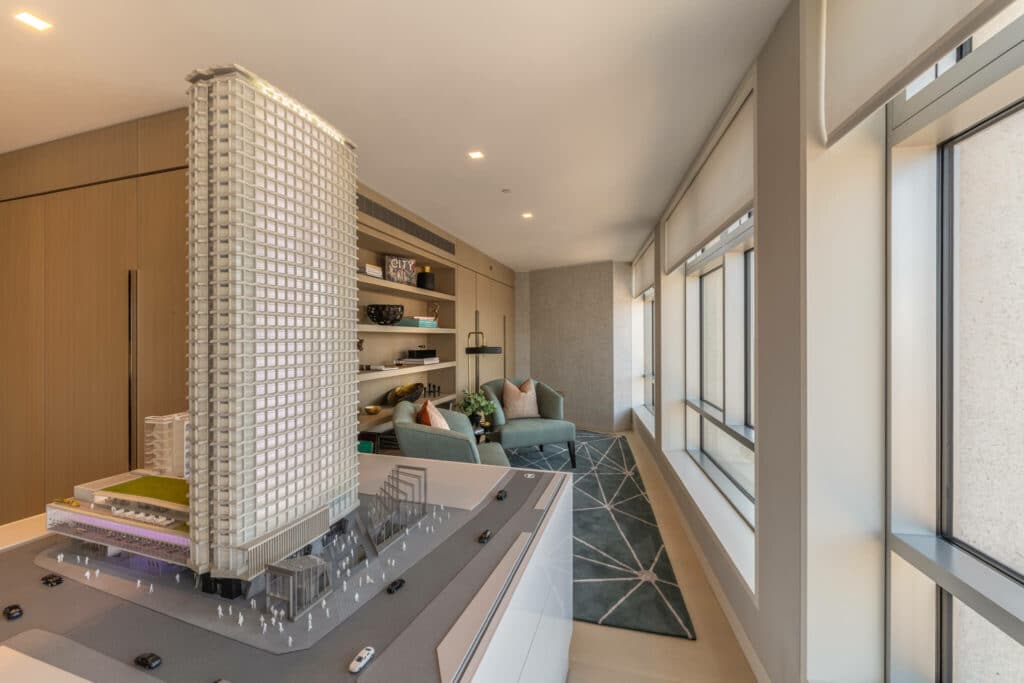 Early yet accurate dimensioning was required due to the unusually small floor to ceiling dimensions of the building, meaning the above ceiling service areas were exceptionally tight.

Silent Gliss had fortuitously just launched the new 4960 Roller Blind model, which allowed for reduced fitting space, and this project was the first specification for the product!

The requirement for integration into the apartment control systems meant that Crestron were the likely specification and a different motor from Silent Gliss standard offer needed to be sourced: one that could interface with the control system via RS485. 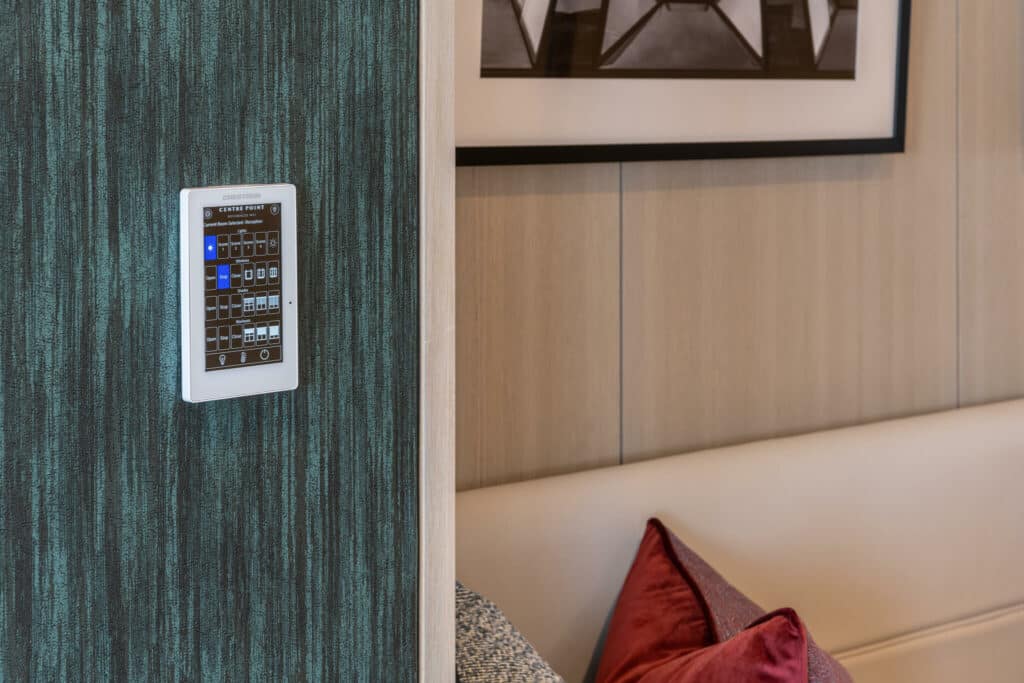 Continued Silent Gliss work with Conran & Partners led to an early mock-up system being presented in March 2013, demonstrating the operability of the blinds with the Crestron control system.

Another major challenge was to reduce as much space as possible for the two blinds and associated control wiring terminations within the proposed blind box.  This was achieved by designing a bespoke connection block for both power and control wiring that could be discreetly mounted at one end of the box, as well as a support structure that could be used to fix the blind box cover.

A project of this size required intricate co-operation between Waverley’s Project Managers, the contractors Multiplex, the architects Conran & Partners, and the M&E and joinery subcontractors.  A mock-up room was created with the joinery contractor, creating a bespoke ceiling pocket and sample blinds. This design allows the blinds to be completely concealed from view when not in use. 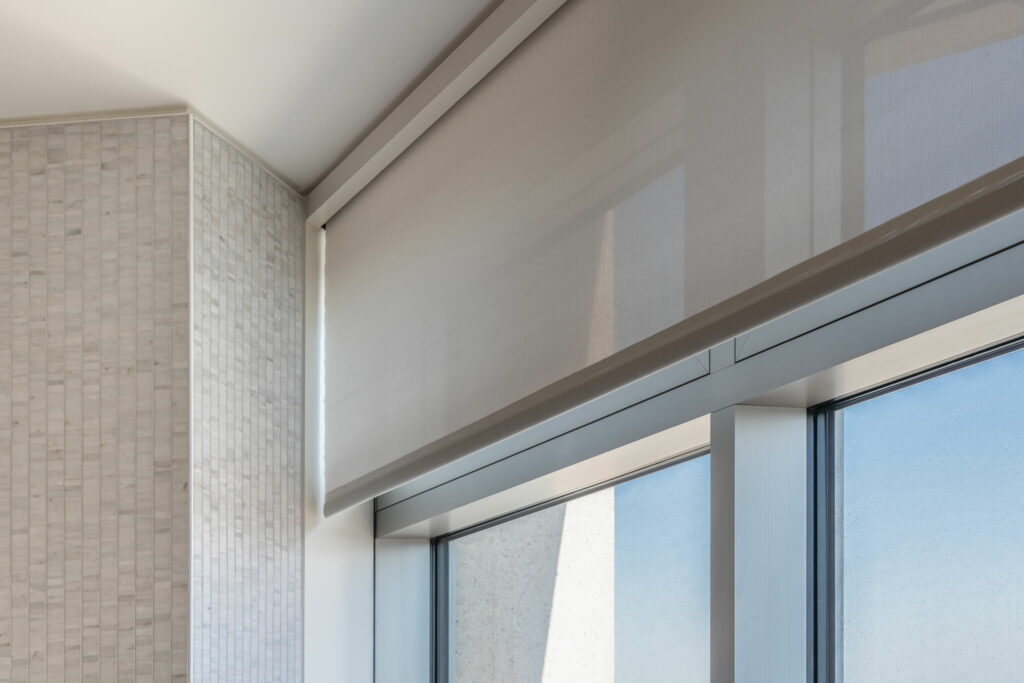 Waverley’s installation work was phased for over 12 months, with a dedicated Project Manager and fitting team being essential to ensure consistency in delivery, giving the contractor peace of mind and assurance of a high standard of workmanship at all times.

All wiring had to be agreed to allow seamless connection and programming of blinds with the rest of the home automation functionality.

Two Silent Gliss 4960 electric roller blinds have been installed to every window in all the apartments.  With one blind mounted in front of the other, hidden in the blind housing when not in use, the blind closest to the window is fitted with Silent Gliss Mercuro B dimout fabric in Grey to provide adequate room darkening and full privacy when required.  The blind facing the room is fitted with Silent Gliss MultiScreen screen fabric in Pearl White with 10% openness factor. 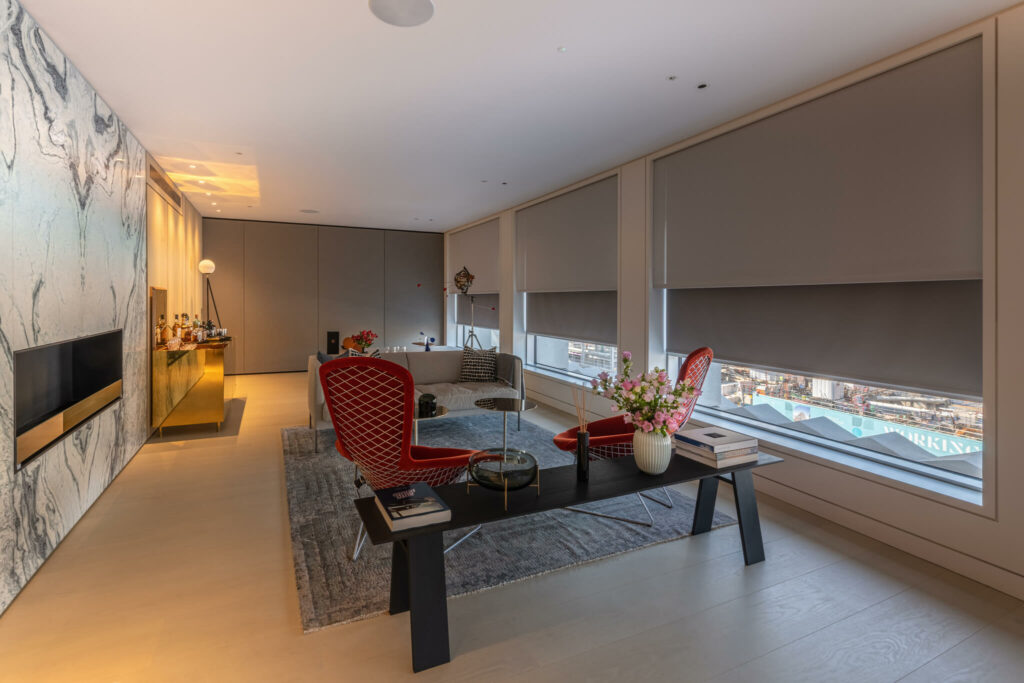 This reduces heat and glare whilst giving excellent through vision to maintain the enviable views of the London skyline. Both fabrics have been chosen in subtle neutral greys, merging with the interior scheme and the original tiling very pleasingly. 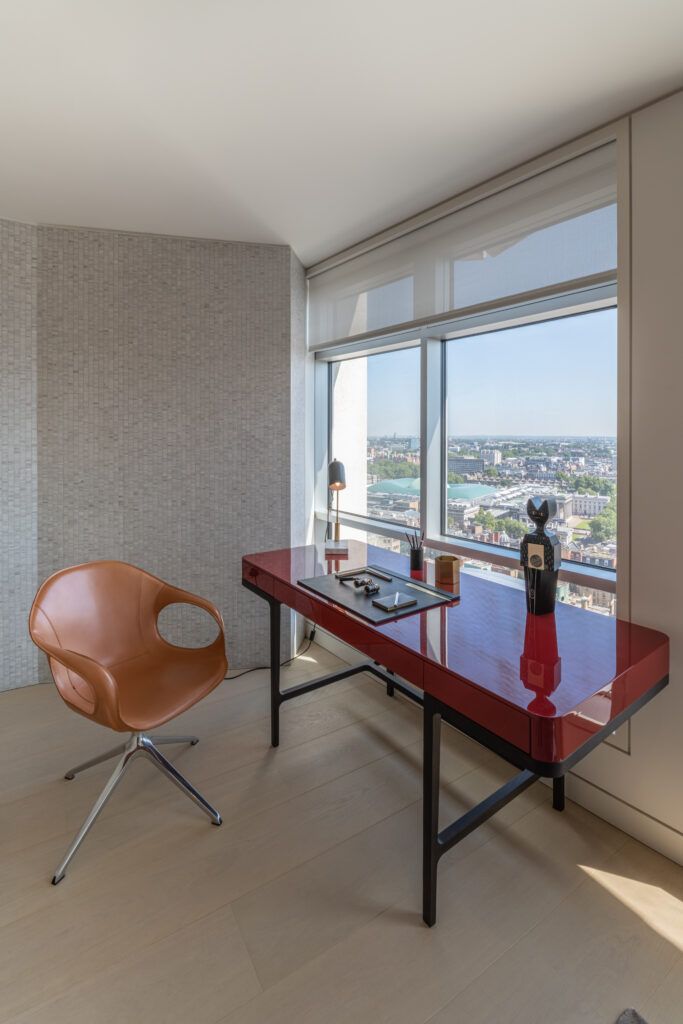 The blinds are operated by Somfy Sonesse RS485 motors, ensuring they integrate seamlessly with the Crestron building management system, allowing control of the blinds (including pre-set intermediate stop positions) from the wall mounted Crestron touch panels in each room and at every bedside. 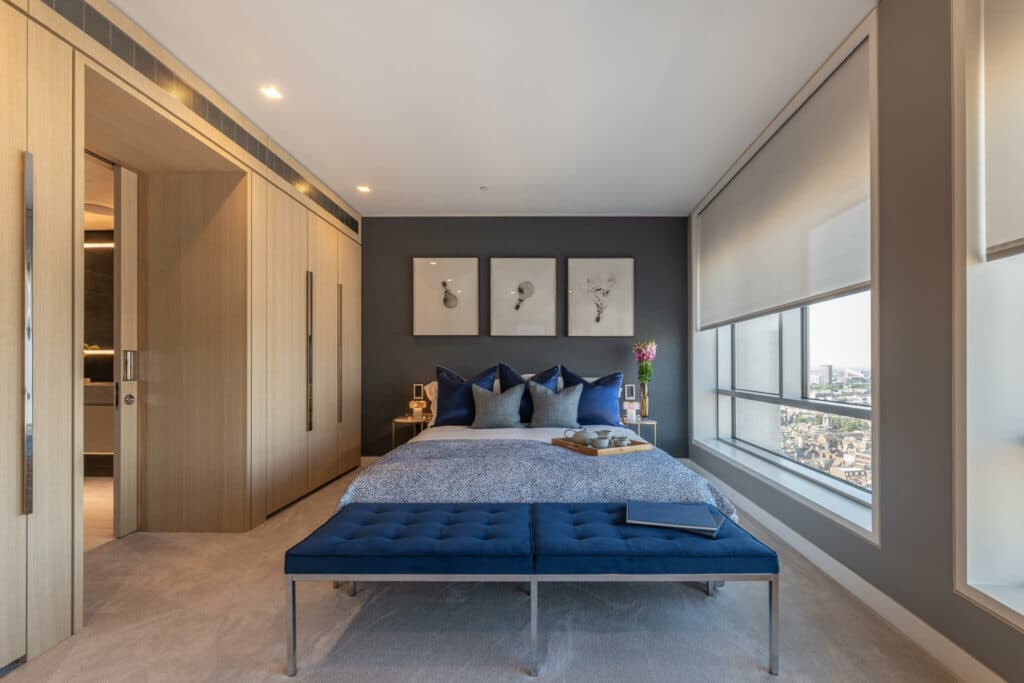 These are simple and intuitive to use, with diagrams of the pre-set stop positions for either ‘sheer’ or ‘blackout’ on the touch panel. 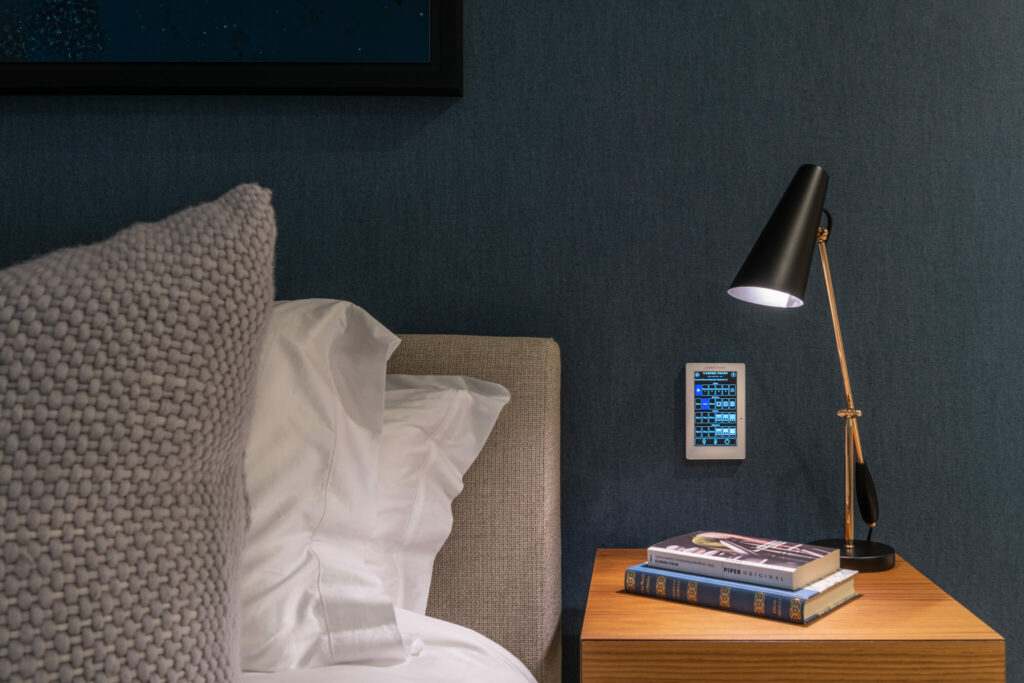 The finished project is impressive!  We are proud to have been involved and it is a pleasure to see the blinds in use and working so well with the whole scheme.  The Centre Point tower conversion also achieved a BREEAM rating of ‘Excellent’. 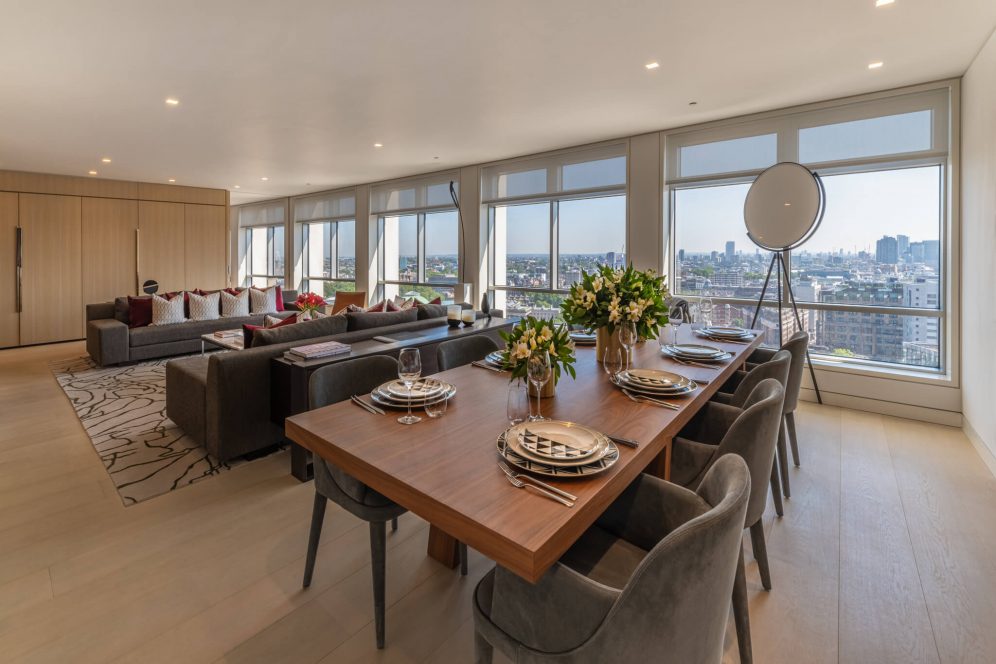 “We have been fortunate to be involved in some of London’s biggest development schemes, but Centre Point is different.  More than a development site, it is a national treasure.” – Mike Hussey, Chief Executive, Almacantar

“When the revival of Centre Point is complete, we believe it will restore this building to its rightful place as one of London’s most cherished design classics – a modernist masterpiece in the heart of a great creative city.” – Tim Bowder-Ridger, Senior Partner, Conran & Partners

“Centre Point has been an incredible project for us to work on.  It was not without its challenges but we enjoyed working with the Multiplex team, and the end result is a great example of integrating blinds into a high specification environment utilising technology and well planned concealment to maximum effect.” – Bruce James, Director & Dedicated Project Manager for Centre Point, Waverley 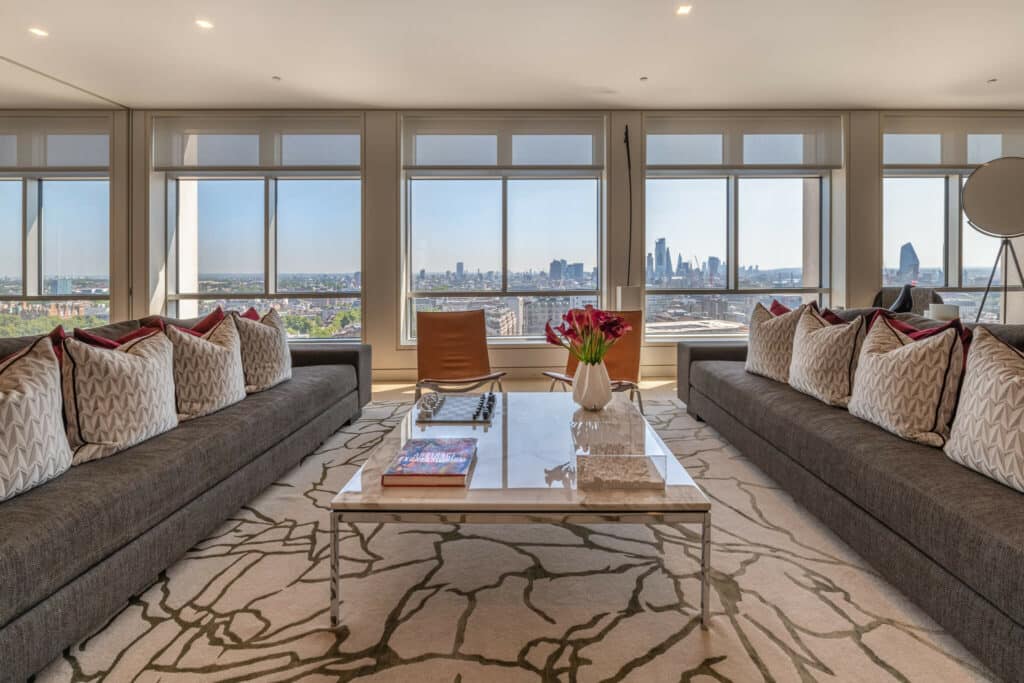