Home > Our Projects > The Wallace Collection


50 no. Electric Verosol pleated blinds installed adjacent to artificial lighting above a central glazed rooflight, connected to Somfy control units to interface with the lighting controls to achieve the correct light levels

The Wallace Collection is a museum in London situated at Hertford House in Manchester Square, the former townhouse of the Seymour family and Marquesses of Hertford. It is named after Sir Richard Wallace, who built an extensive art collection, along with the Marquesses of Hertford, in the 18th and 19th centuries.  It is one of London’s hidden gems of free entry cultural attractions.

In 2012, the Wallace carried out a major £5m renovation of the Great Gallery: the magnificent principal room of the Collection. This space contains what has been described as one of the most jaw-dropping collections of Old Master paintings in the world, and certainly one of the greatest picture galleries in Europe. 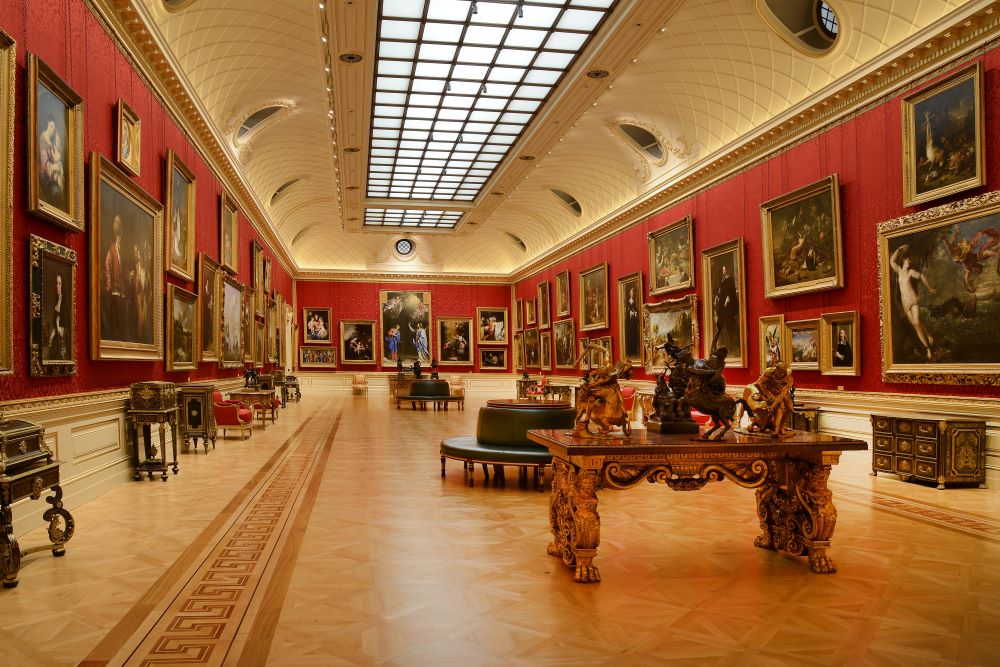 The refurbishment was funded by a grant from the Monument Trust, a charitable body set up by a member of the Sainsbury family.  This was a two year project and the gallery reopened in September 2014.

One of the main aims of the refurbishment was to allow natural light back in to the Great Gallery.  This involved replacing a ceiling from the 1970s that was packed with environmental ducts and machinery. 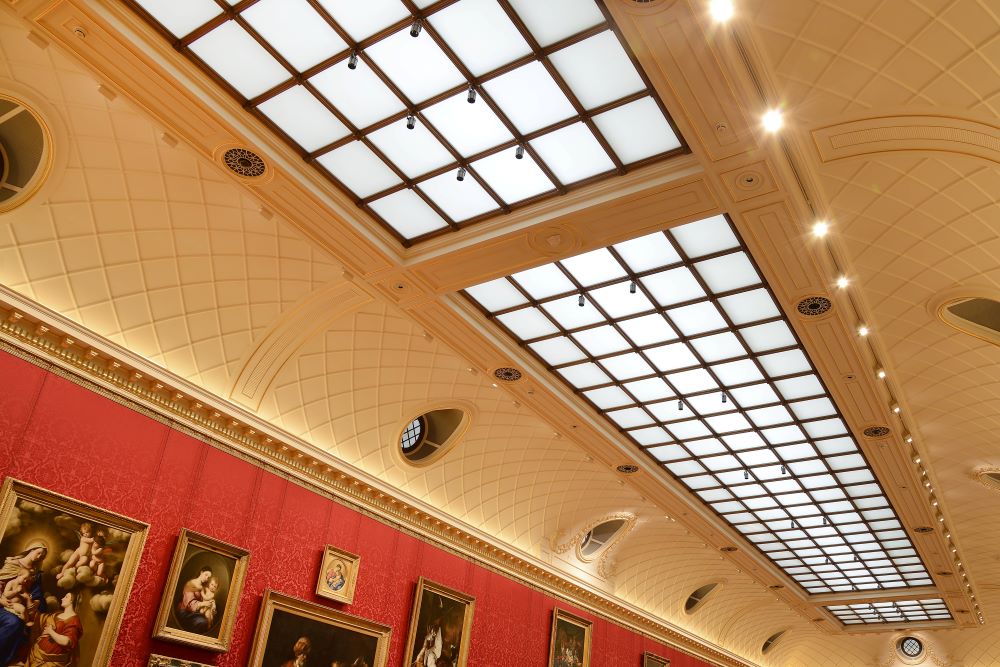 Waverley was awarded the task of providing a solar shading solution to control the light levels required.  The client required a constant optimum light level (LUX) to provide the best light for the paintings in the gallery, maximising and controlling incoming daylight.

This was a highly technical and demanding project.  Our expertise in motorised blinds and controls came into play and, following detailed consultation and collaboration with the engineers and contractors on site, 50 no. electric Verosol pleated blinds were installed adjacent to artificial lighting above the central glazed rooflight. 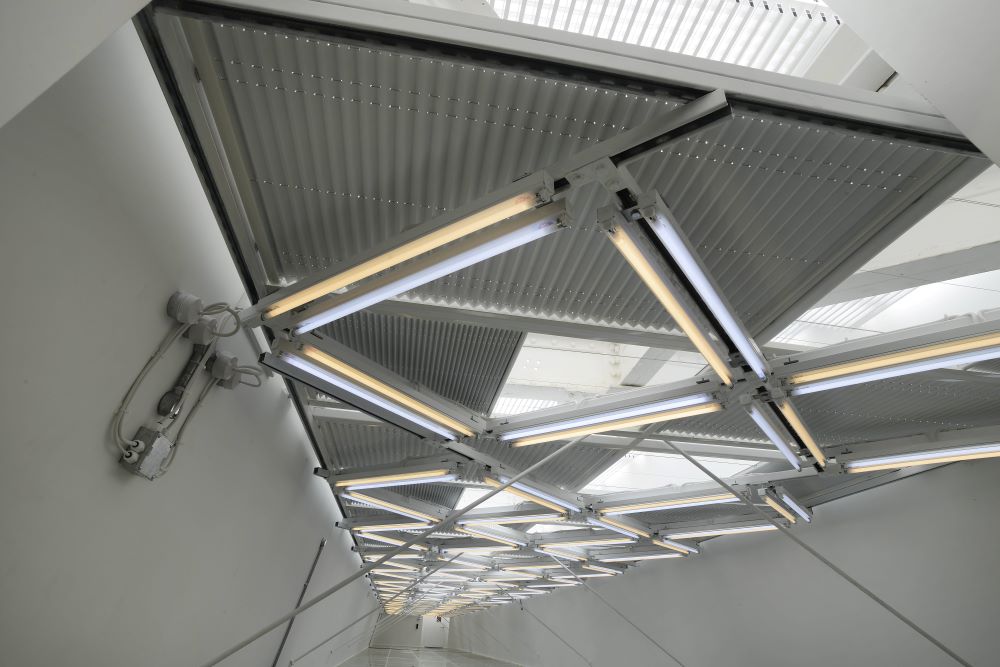 The blinds are controlled by Somfy motors and were connected to Somfy KNX Moco Control Units to interface with the lighting controls to achieve the correct light levels.  We provided wiring and installation of fused spurs and relocation of cables and connection wiring, as well as commissioning. The images above and below show the sheer size and complexity of the installation between the roof and the new ceiling in the Great Gallery.

The central control panel has eight pre-defined ‘scene settings’ which operate via sun sensors in conjunction with the electric lighting. 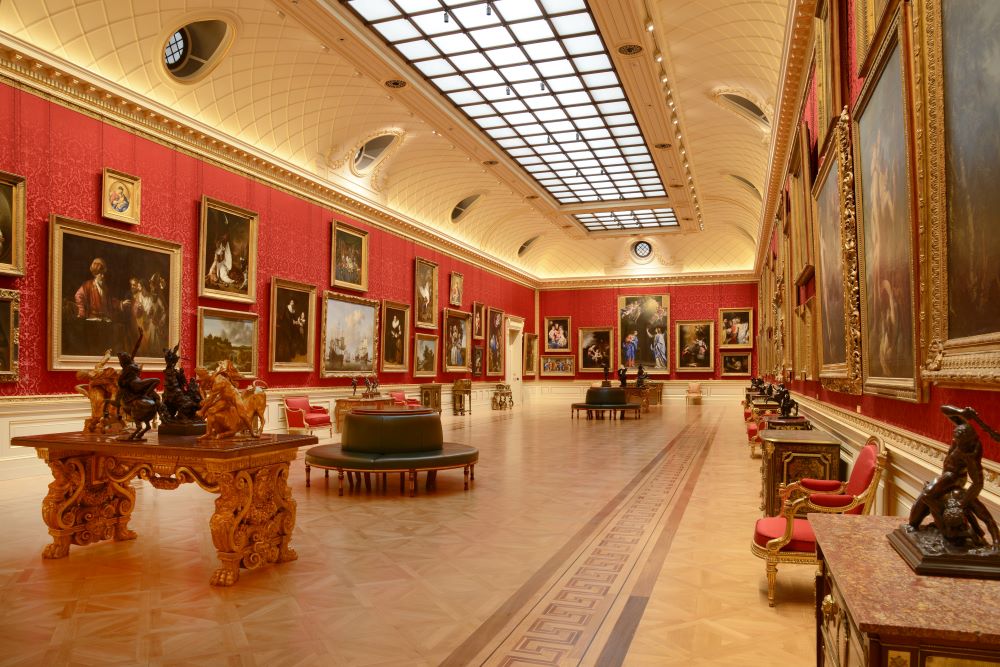 The Outcome – What They Say

” It has been on budget, on time and a team effort. It has been a shared vision and to see it all fall into place so smoothly – it just seemed to roll along because everybody really wanted it – is a great feeling” – Christoph Vogtherr, Director of the Wallace Collection

“We lifted the roof off and put in a big central lay light. With some other adjustments as well we’ve managed to allow in the magic that is natural light. Lots of natural light” – John O’Connell, Architect

“Most impressive of all is the coved ceiling.  An entirely new design by John O’Connell, it reintroduces indirect sunlight by means of oval lay lights in the cove and a large lay light in the centre of the room… Daylight brings the room alive, and lends sparkle to the paintings, enhanced by an entirely new lighting scheme” – Country Life Magazine

“The space overwhelms the viewer…  The key to this effect is the architectural modification of the space, reopening a skylight once hidden by a false ceiling. This allows natural daylight to fill the room, burnishing Titian’s red-pinks and letting the blue robes of the Madonnas sing softly against the new red damask walls” – Apollo Magazine