The neo-classical 1930s building in Portland stone was originally designed by William Curtis Green, who was also architect of the Dorchester Hotel.  The £60m transformation project for the Met, constructed by Bam, involved a significant reorganisation of the building, including the construction of an upper floor with roof pavilion, a new side wing and a rear extension, but the scene stealer is the eye-catching new entrance pavilion at street level on the Embankment.

The glass entrance pavilion, capped by a floating elliptical roof extension, creates a new public face for the Met with an open, transparent and accessible design that embodies the organisation’s core values.  The architects’ brief was to make it simultaneously welcoming to the public whilst highly secure.

The pavilion has panoramic views including directly across the Thames to the London Eye.  Once the building was occupied, despite the surrounding plane trees and overhanging eaves of the pavilion, glare control became an issue, particularly from early morning low winter sun, which was disturbing for the security x-ray and reception.

The Challenge & The Solution

Having used Waverley to provide blinds throughout the rest of the building for the main contract, the architects were keen to use us again for this specific element.

During design meetings with AHMM and meetings on site with Vinci Facilities, various shading options were considered.  Roller blinds were discounted because they would not satisfactorily suit the curved glass bays.

After detailed consideration, we used ShadeTech VL-C chain operated vertical louvre blinds  with BetaScreen90 fabric to allow filtered natural daylight into the reception area and maintain a view to the outside.  These could be stacked neatly against the mullions when not required.  This involved a bespoke and intricate fixing detail to the curved timber ceiling cladding. 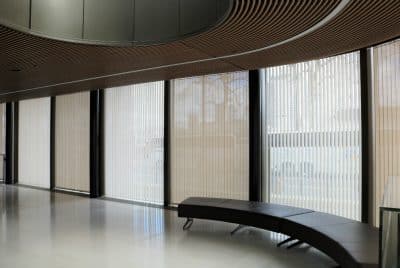 Installation was tricky. We were not able to load the curved timber slats and demounting it adjacent to the windows to fix to the concrete slab above was not an option. The only suitable fixing points were at each end using the glazing mullions.

To overcome the support issues, the headrails were fixed to an aluminium channel spanning the mullions with discreet end brackets.  Card templates were made of the curved glazing, so the channel and blind headrail could be curved to match the shape of the glazing. The main load was on the end brackets, but a central stabilising hanger rod was fixed between the ceiling slats to the main ceiling substrate above.

Blind headrails needed to be as tight as possible to the soffit to prevent any glare passing over the top of the blinds when the sun was at a low angle.  The blind hardware was powder coated black to compliment the bronze mullions.

The building was also fully operational which meant that all measuring and installation had to be carried out after normal working hours.

The result is an excellent shading solution that blends in seamlessly with the interior finishes.  To one side of the entrance is the Eternal Flame, set within a contemplation pool, commemorating officers who have lost their lives in the line of duty.  The book of remembrance inside the pavilion overlooks the flame. 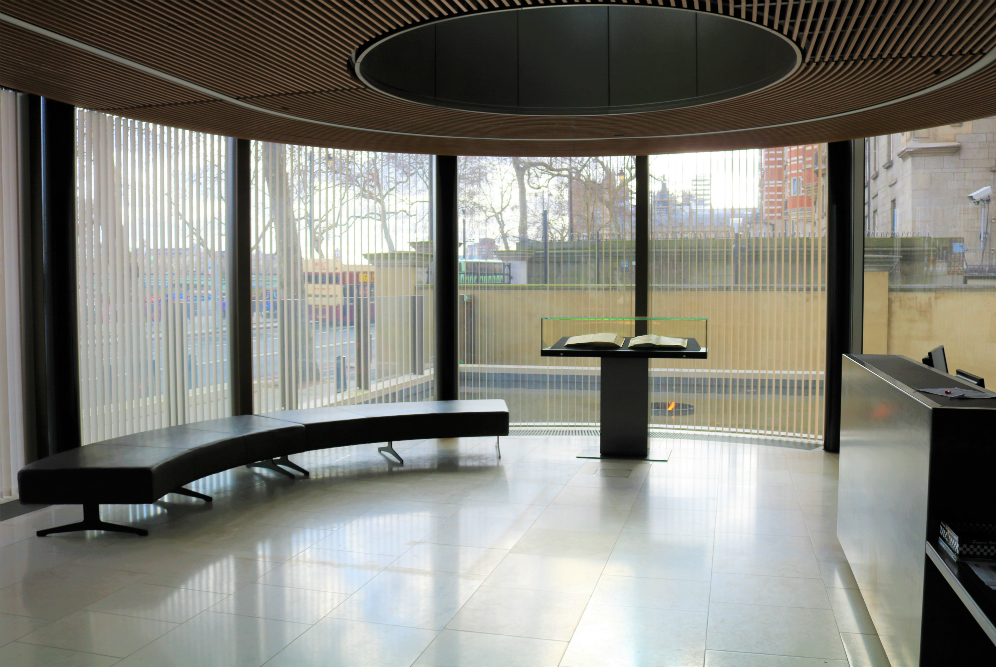 Building Magazine Project of the Year 2017

“The brief was for transparency and a non-institutional atmosphere. The front-door experience is very different. We do have security, but it feels as light as it could be. You can get very close to the building; you could get close before, but not see inside”

“Our New Scotland Yard preserves and showcases elements unique to the heritage of the Metropolitan Police whilst creating a robust headquarters building, fit for the 21st century in the heart of Westminster” – Paul Monaghan, AHMM Director

“A new curved-glass entrance pavilion stands at the Victoria Embankment frontage, a streamlined art deco-ish form that sits well with the 1930s building behind” – The Guardian